In a town known as Hartville, Ohio in Northeastern Ohio is a state park; Quail Hollow. This was one of the first settlements in this area with the houses still on the property right down the road from the Hartville Pie Factory, once known as the Wild Boar Tavern many moons ago and was part of the underground railroad. At Quail Hollow there is a super old cemetery (late 1700’s to 1800’s). A few of my friends and I have gone there on a few occasions. The first time I went by myself at night (yea it was freaky) and I could hear a woman humming on a path right behind the graveyard. I looked over there and didn’t see anyone at first but at a second glance saw a woman in a white gown smiling weakly. I left quickly, hearing footsteps right behind me while I felt a presence following me. Many, many, many more stories occurred (if you’d like to know just e-mail me at Hippieboi@aol.com). Anywho, I went snapping pictures randomly one night there one night and noticed the one picture was COVERED in orbs. I tried recreating it thinking it might have been dust, water something. I couldn’t do it. And if examined closely, some of the orbs are actually illuminating from behind a few of the leaves. Heres the pic!!!! 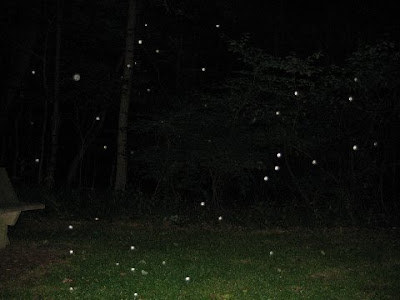