You must get this book! 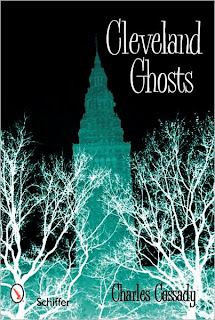 You may remember me mentioning being interviewed late last year for an article in West Life. Well, the author, Charles Cassady, had mentioned at the time that he was in the process of collecting stories for a book he was writing.
I expressed how cool I thought that was and asked him to let me know when the book would be in stores. Well, back in June, he sent me an email letting me know that “Cleveland Ghosts” would be in stores by Halloween 2008. Sweet.
Well tonight I dragged the wife and daughter out for a nice family movie (Saw V) and stopped in a Border’s beforehand.
Right when you walk in they have a Halloween/haunted-themed table. Among them was Charles’ new book! I grabbed it and started thumbing through it. It looked awesome! He’s got dozens of Cleveland pictures and all the ghost stories we’ve come to know and love. Franklin Castle, Squire’s Castle and Melonheads (oh my!) Plus TONS of smaller and lesser known stories.
OK, I may be a bit biased because I got a mention in the book (YAY!), but I can’t put it down. It’s like he took all the stories I’ve heard over the past twenty years and put ’em all in one book. (In actuality, he did research web sites like Creepy Cleveland and Dead Ohio along with interviewing anyone who’s anyone in the field of local ghost-stories)
I’m kinda hoping to get a real, more thorough, review posted in the future once I get a chance to read the whole book. But if what I’ve read in only a few hours is any indication… well, buy the book. You won’t be sorry.