When I developed the roll of film with the Witch Grave pics, the associate at the photo op. explained that a couple of photo’s didn’t develop. Well the next week, I took the negatives to a different place and had them develop just the strip of film that didn’t show the first time. I was floored to find this picture of what appears to be a skull-like ghostly apparition. Like I said before, it was a clear night. As a matter of fact, take a look at the sky in the previous witch grave photo – YOU CAN SEE THE STARS IN THE CLEAR NIGHT SKY WITH THE ADDED BONUS OF A SHOOTING STAR JUST LEFT OF CENTER!! I find it creepy that a star decided to enter the atmosphere at the very instant I snapped a shot of the grave! With that in mind & the skull-like mist, we’ve got quite a haunted spot. It gives me shivers to think something was there in my precense. Something that did not want to be photographed until the second try. Lucky thing that I developed that last strip,huh? 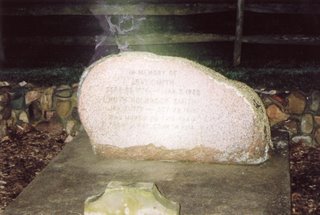 2 thoughts on “The Undeveloped Photo”