From the Creepy Cleveland Archives
—
Contributed by Suzanne

Hi,
A friend of my sister wanted me to take pictures in her house. Strange things happening and her son was always talking to “somebody”. She thought it was a little boy named Jacob, a friend of her older son who had died in a fire down the road from them. My son and two daughters and I went on the night they were moving. We stayed quite a while snapping pictures, mostly of orbs. Then I went upstairs alone (in the dark) and sat in a bedroom and talked to “Jacob”. I felt so sorry for him, he was terribly abused by his parents. My son came up, I handed him my camera, and went back down. He also talked to “Jacob”. He came running down the stairs later, yelling that they were following him. I told him to turn around and take pictures. 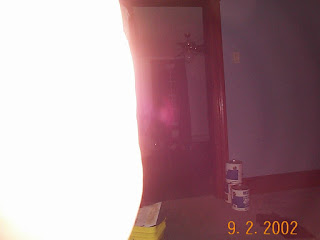 Lots of orbs, but the picture I am sending you, is the one he took in the bedroom that I had been in. Forget my son’s hand on the left side of the picture. Look in the red doorway of the bedroom. There is a little boy, wearing a white shirt, with his hands in his denim pants pockets. Sometimes it’s easier to see if you stand back from the computer.
My sister’s friend came to my house to look at it, and started crying. She said it was Rodney, her daughter’s step brother. They were very close, and it was his bedroom. He accidently hung himself while they were playing. He stood on a toy truck and laughing, said, “Look, I’m hanging myself.” The truck slid out from under him.
Sue