From the Creepy Cleveland Archives
—
Contributed by Becky

This picture was taken at Squire’s Castle on Friday, October 26th at about 9pm. I used my typical ghost-hunting camera, which is a Polaroid 35mm with Kodak 400 film. Out of about seven pictures taken at Squire’s Castle, this is the only one that developed with a very dense, clear orb. Dr. Ken of the Ohio Ghost Hunters Society confirmed the anomaly for me. I was aware of all the stories and rumors that have been told over the years, but I never believed that Squire’s Castle is haunted. Maybe now I the have proof to show that it most definitely is still home to Mrs. Squire! 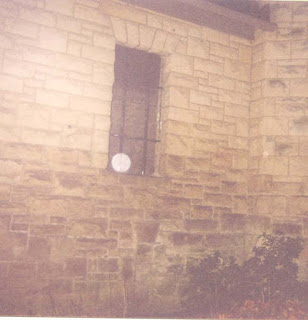